What’s going on in Myanmar?

Myanmar (or Burma) has been in turmoil for years- the crisis is now so bad, it fills our television screens every day. I decided to do some digging into this crisis as soon as I remembered a Nobel prize winner is in a Glorious position in government as a sort of Prime Minister whilst the most appalling ethnic cleansing happens under her nose.

Myanmar is made up roughly of 90% Buddhists; the other 10% Muslims ( the Rohingya).

Ever since then, tensions have escalated with thousands of Rohingya being chased over the border into Bangladesh where they live as starving refugees.

The Myanmar military have burnt entire villages and killed/raped countless Rohingya. Land mines are laid in the escapees’ wake as a deterrant- in case they wish to return home.

So, it happens that Aung San Suu Kyi, the leader of the National League for

Democracy and the first and incumbent State Counsellor, a position akin to a Prime Minister and  the 1991 Nobel Peace prize winner- has decided to call the ethnic cleansing ‘fake news’.

The Burmese do not recognise the Rohingya as citizens, but call them ‘illegal immigrants’. No matter what, nothing justifies wiping out an entire ethnic group.

It’s even more galling that a Nobel Peace Prize winner is at the helm and does …..nothing.

I don’t know about you, but my journey about town today does not involve land mines or being in fear of my life. My biggest problem at the moment is whether to buy another coffee here at my favourite café- or go home and make one instead. 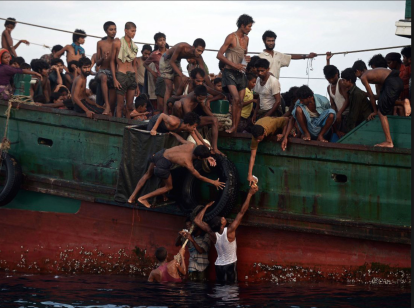 Let’s Wake up and Smell the Coffee, folks. We could be these people if it weren’t for God’s grace.

“All tyranny needs to gain a foothold is for people of good conscience to remain silent.”- Edmund Burke

Please Donate to Oxfam if you can.

14 thoughts on “What’s going on in Myanmar?”